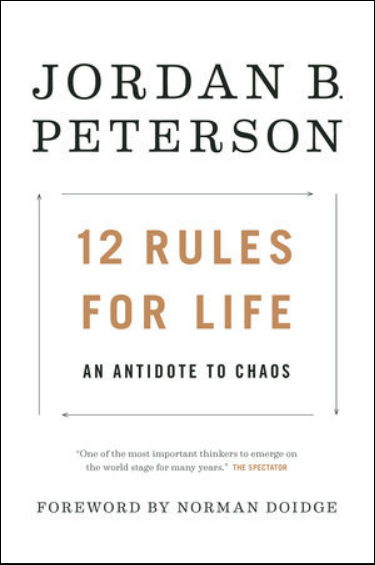 University of Toronto, Professor Jordan Peterson has become a phenomenon.

Jordan B. Peterson’s “12 Rules for Life” is a call to clarity in an age of chaos.

Pre-order your copy today – http://amzn.to/2zw1tow. Or give it to someone you love.

That’s not an over statement. The Videos featuring him online get millions of viewers. His Book “12 Rules for Life” An antidote to chaos, is the biggest bestselling ever written by a Canadian Author.

In that book, Peterson questions the left’s rhetoric on gender and maybe for that his being targeted for destruction. The Guardian calls him dangerous. Vox just published a massive & almost an unbelievably stupid piece accusing Peterson of “Reactionary politics that validate white straight and cisgender men (where sex matches the gender they were assigned at birth) at the expense of everyone else. Really a mouthbreathingly stupid.

Obviously, a hurt dog barks. Peterson has done something that has made people upset. What has Peterson said, the alt left find so provocative and upsetting?

“Well, I’ve pointed out quite clearly why they are factually incorrect and ideologically possessed. Particularly on issues like gender. The radical lefties insist that gender is a social construct and that’s just simply not true. The scientific data is absolutely clear and no reasonable scientist disagrees and so their all foaming at the mouths because I’m poking holes in their cherished notions. They also think that people can be completely malleable because that means people can be remade over in their ideological image.”

Self-help books are usually easy reads, comprising insightful nuggets of wisdom followed by much repetition, filler and fluff. If you’ve read He’s Just Not That Into You(about why he never called again) or Fluent Forever (about learning languages), you’ll know exactly what I mean. These are books that would have made excellent magazine articles, and whose riches can be gleaned simply by reading the chapter titles.

Which brings me to the best-selling 12 Rules for Life: An Antidote to Chaos, by clinical psychologist and University of Toronto professor Dr. Jordan B. Peterson. In contrast to most self-help books, it is bursting with ideas that develop his almost tongue-in-cheek list of rules into a cohesive philosophy for living heroically in a time of moral chaos. The attention of many reviewers has been caught by the description of crustacean social dynamics that illustrates Peterson’s advice to “Stand up straight with your shoulders back” (Rule 1). I’m more interested in Peterson’s interdiction against bothering children when they are skateboarding (Rule 11) because it evolves into an argument against the anti-human nihilism of those who believe the earth would be best served by the extinction of the human race.

Peterson is a man who truly loves humanity, not just as a grand concept, but as individual members of a race of beings, none of whom ought to be sacrificed to save the whales or usher in the latest Five Year Plan. Love for the individual human being fuels Peterson’s rejection of Soviet-style totalitarianism no less than it condemns the anti-humanism of Columbine killer Dylan Klebold.

In fact, the “Stand up straight with your shoulders back”/lobster fight chapter strikes me as a “hook” that gets post-Christian readers interested enough to engage with Peterson’s more obviously Christian ideas. Although some readers may be somewhat mystified as to what kind of Christian Peterson might be—his lobster-based arguments for both human hierarchy and sexual difference reveal an unabashed embrace of evolutionary theory—he bluntly states that the central figure of Western Civilisation is Jesus Christ.

Christ appears only on page 42, but he dominates the book in an unusual way, not only because Peterson begins his book with a nightmare of himself at the centre of a cruciform cathedral, but because Peterson indicates the Cross throughout his work. For example, Peterson identifies suffering as an unarguable constant of human life. (As the father of a child with juvenile rheumatoid arthritis, he has grappled in a very personal way with the suffering of the innocent.) For another, he is fascinated with the Bible, not in a strictly theological sense, but as a source of psychological truths, or as truths about human psychology. This, too, makes Peterson’s thought attractive and instructive to listeners who have hitherto rejected the Scriptures as irrelevant to modern life.

Alongside love of humanity, horror at totalitarianism, recognition of Christ at the centre of Western Civilization, and acceptance that suffering is inevitable, Peterson reveals a fascination with truth-telling. In his famous interview with Britain’s Cathy Newman, Peterson stated that he is very careful with his words; having read his book, I realize how very true this is. Under “Rule 8: Don’t Lie”, Peterson describes his quest to always tell and act the truth, an endeavor which is much harder than it sounds, involving strict self-policing. While reading Peterson on the importance of telling the truth (“or, at least, don’t lie”), I was reminded of Saint Augustine of Hippo, who thought any lie was an abuse of God’s merciful postlapsarian gift of language. Peterson thinks hiding from the truth, or lying, is deeply damaging to the character, leading ultimately to disappointment, failure, vengefulness, and hell.

Linked to the importance of truth is the importance of paying attention, an emphasis which reminded me of the philosophical work of Canadian Catholic priest and theologian, Bernard Lonergan, whose own rules for life were Be Attentive, Be Intelligent, Be Reasonable, Be Responsible, and, as he neared death, Be Loving. Fortunately for the general reader, Peterson’s work is much easier to grasp than that of Lonergan.

This brings me to the question of whom this book is for. I think it’s for anyone grappling with contemporary ideological battles—or who feels that they are drowning in chaos. A widely reviewed Amazon #1 bestseller, 12 Rules for Life is already serving as a bridge between Christians and non-Christians interested in the truths of human life and in resisting the lies of ideological totalitarianism. I would particularly recommend it for college-bound teenagers who may otherwise find themselves depressed by the deeply nihilistic, anti-human, and decidedly anti-Christian trends they will almost certainly encounter.

To give you an impression of the Toronto professor’s impact on the wider world, let me tell you an anecdote: I was in Kraków, Poland in January, and a Polish astrophysicist from Gdańsk asked my luncheon party if we had heard of Jordan Peterson. Graduates of the University of Toronto, Aberdeen University, Edinburgh University, and the University of Warsaw, we all had heard of Jordan Peterson. He’s the man of the hour, and he has written a book that challenges non-Christians to contemplate Christ.