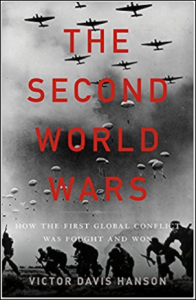 World War II was the most lethal conflict in human history. Never before had a war been fought on so many diverse landscapes and in so many different ways, from rocket attacks in London to jungle fighting in Burma to armor strikes in Libya.

Victor Davis Hanson is an American classicist, military historian, columnist, and farmer. He has been a commentator on modern and ancient warfare and contemporary politics for National Review, The Washington Times and other media outlets. en.wikipedia.org  Born:September 5, 1953 (age 64), Fowler, California, U.S. Nationality: American

One of our most provocative military historians, Victor Davis Hanson has given us painstakingly researched and pathbreaking accounts of wars ranging from classical antiquity to the twenty-first century. Now he juxtaposes an ancient conflict with our most urgent modern concerns to create his most engrossing work to date, A War Like No Other.

Over the course of a generation, the Hellenic city-states of Athens and Sparta fought a bloody conflict that resulted in the collapse of Athens and the end of its golden age. Thucydides wrote the standard history of the Peloponnesian War, which has given readers throughout the ages a vivid and authoritative narrative. But Hanson offers readers something new: a complete chronological account that reflects the political background of the time, the strategic thinking of the combatants, the misery of battle in multifaceted theaters, and important insight into how these events echo in the present.

Hanson compellingly portrays the ways Athens and Sparta fought on land and sea, in city and countryside, and details their employment of the full scope of conventional and nonconventional tactics, from sieges to targeted assassinations, torture, and terrorism. He also assesses the crucial roles played by warriors such as Pericles and Lysander, artists, among them Aristophanes, and thinkers including Sophocles and Plato.

Hanson’s perceptive analysis of events and personalities raises many thought-provoking questions: Were Athens and Sparta like America and Russia, two superpowers battling to the death? Is the Peloponnesian War echoed in the endless, frustrating conflicts of Vietnam, Northern Ireland, and the current Middle East? Or was it more like America’s own Civil War, a brutal rift that rent the fabric of a glorious society, or even this century’s “red state—blue state” schism between liberals and conservatives, a cultural war that manifestly controls military policies? Hanson daringly brings the facts to life and unearths the often surprising ways in which the past informs the present.

Brilliantly researched, dynamically written, A War Like No Other is like no other history of this important war.

Examining nine landmark battles from ancient to modern times–from Salamis, where outnumbered Greeks devastated the slave army of Xerxes, to Cortes’s conquest of Mexico to the Tet offensive–Victor Davis Hanson explains why the armies of the West have been the most lethal and effective of any fighting forces in the world. 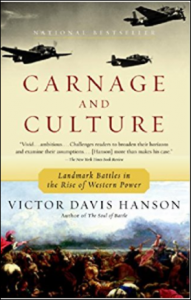 Looking beyond popular explanations such as geography or superior technology, Hanson argues that it is in fact Western culture and values–the tradition of dissent, the value placed on inventiveness and adaptation, the concept of citizenship–which have consistently produced superior arms and soldiers. Offering riveting battle narratives and a balanced perspective that avoids simple triumphalism, Carnage and Culture demonstrates how armies cannot be separated from the cultures that produce them and explains why an army produced by a free culture will always have the advantage.