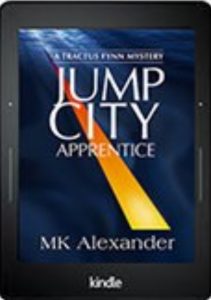 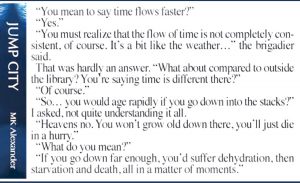 From Mikipedia, the fee-based encyclopedia

Tractus Fynn (date of birth, undetermined) was a long-servicing officer in the Amsterdam Police and noted detective. The youngest of three brothers, Detective Inspector Fynn claims to have the ability to travel in time, though this is often disputed. He has authored several books on history, notably:
Kid Charlemagne, A First-Hand Account of the Saxon Wars
A Monk’s Life, Illuminated Manuscripts of the Eleventh Century
One Hundred and One Viking Mead Recipes
The Fin D’Siecle Rooftops of Paris
Occidental Policing Methods in an Asian Cultural Context: Assignment Hong Kong
It should be noted he has used various pen names, Aldus Kenon, Yanni Choros, and Janek Jones, to name a few. Fynn has been frequently quoted as well, the most famous of his being: “I certainly do not trust what I read on the Internet. All text is subject to easy and instant change by almost anyone. How can I trust the written word nowadays? And why should I?” Another memorable quote: “The past always changes the future.”

There is considerable debate as to when exactly Tractus Fynn was born. Some sources place that date as early as 464 BC, though it should be noted that calendars at that time do not resemble anything in use today. It is fairly certain that he was born on the west coast of Hellas where he spent his early years, living with his father, mother, grandmother and two brothers. The family operated a small taverna by the side of what is now considered the Achelous River.

Joining the Amsterdam Police in 1980, Fynn quickly rose through the ranks to achieve the rank of Detective with the National Crime Squad, and Chief Inspector in the Special Investigative Services. He was awarded the Interpol Investigator of the year, 2011. In 2013, DCI Fynn was a candidate for the ICEP (Interpol Chief exchange Program) and swapped places with Sand City Police Chief Leonardo Arantez for approximately three months. Some reports state that the exchange did not go well however, when no less than eight unsolved murders befell that sleepy resort time during his tenure. Detective Chief Inspector is also noted for his uncanny investment abilities according to Eurotrader.org, amassing fortune of nearly $100 million (US). Currently, DCI Fynn is retired and lives with his wife Lorraine and daughter Anika, in Sand City.

Inspector Fynn is further credited to have solved the “Reservoir Murders” in 2015. No less than seven victims were strapped in their cars and sunk below the ice in the Barker Meadow Reservoir, Nederland, CO, just outside the city of Boulder.

Whether or not Fynn is able to time travel remains controversial. His five rules of travel have become credos for other like minded people: 1. Don’t go back (to dreadful places). 2. Tread Lightly (below the quantum threshold of change). 3. Stay as long as possible. 4. There is only one time-line, (the one you remember). 5. Avoid dying at all costs. Rule five is general accepted as valid and implies that Fynn is not an “immortal being.”

Fynn’s supposed “Two Modes of Travel” are even more contentious. Mode 1, being the Soft Jump, the ability to re-enter a previously lived consciousness, and Mode 2, the Hard Jump, his claim to be able to physically transport himself to a future time, or in some cases, to the past, where a gap in his concurrency exists. Neither claims have been substantiated at this writing. Further, Inspector Fynn relies on what he terms libra lapsus to initiate any time travel whatsoever.

There are perhaps too many to list, though among them are:
Altered history in 2016 to allow the Chicago Cubs to win the World Series
Currently owns the only full translation of the Voynich Manuscripts
Single-handedly refilled the Aral Sea
Prevented the assassination of US President Franklin Delano Roosevelt in 1933